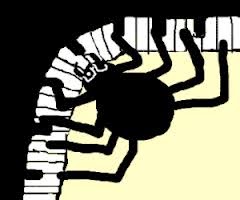 During these meals, and in the two-person kayak in the late mornings, with acres of  pines and birches as our witnesses, we talked more about the spider and Rachmaninoff, outlined some wishes and goals, and wondered about what might come next, after we leave this life, a question we like to think both of our mothers know the answer to. As an aside, during the half hour that we got online in the neighboring town of Bath, Maine during our third day of retreat, I found out that my cousin Diane was diagnosed just days before with stage four melanoma.  Diane was my best friend when we were kids - she's my age, and this feels so close to home.
My friend Deb, a hard-core pragmatist, repeats her mantra to me almost weekly. “Biffy, we’re all going to die some day.  Why not accept it and get on with your life?” Deb purchased three plots in a “green” cemetery in Maine about five years before, when she was taking care of her ill mother’s final details.  I visited the cemetery with her a few years ago, and standing shoulder to shoulder with her at her own grave site freaked the hell out of me.
During our remaining days together at the cottage, Laura and I talked about our losses and our joys, and the realization that it’s futile to try to control any of it – our own lives or the lives of the people we love. Death is a given, and we will obviously experience more or it as we age.  That’s the downside of a full life of friends, family, and pets.  But who’s to say what’s up, and what’s down, and what’s good or bad, anyway.  If I try to put a value on these things, then I’m trying to control what I can’t, and that only causes pain. We remembered the many times a so-called “bad” thing happened to us, only to open another door leading us to something we didn't know we needed.
By the end of the week, after spending much-needed time with my new wife and longtime friend in this perfect cottage, I could consider that the spider was, without judgment or value, simply climbing up the water spout, being rained out of it, and climbing up again. Jack’s granddaughter knew all the time that this was all there was to it.  It seems to me that we unlearn the simplicity of things as we grow older.  I would like to have a talk with Rachmaninoff and ask him what he had in mind when he wrote the Etudes Tableaux, and in fact I could look that up on line at any time, but I think it’s best that I just put on my earphones and enjoy the music.

Laura and I have decided to make a yearly trek to strand ourselves on this – or another - island.  Next year, I will bring along all of my Joan Baez and Janis Joplin music.  Laura will bring a couple of her antique books of children’s rhymes and fairy tales, and we’ll really do ourselves in trying to find in those stories the meaning of life.

You can listen to a 30-second sample of my favorite Etudes Tableaux piece.

Below is Jack's granddaughter singing itsy bitsy spider - it gets better as it goes along!