Everyone knows that Boston was swallowed by a frigid seven-foot snow serpent last month.  After five long weeks the sun came out, and the following day, some cruel unknowing stranger passed onto me the world’s most horrific virus. Sometime during my feverish delirium Laura felt the need to remind me that we are all colonized by zillions of microbes. Laying there defenseless, I was sure the ringing in my ears was from a band of miniscule microbe-powered covered wagons circling my sinus cavity.

I figure if I need a laugh, probably other people need a laugh.  The sun is beating down the weekend’s puny inch of slushy snow, and I just found a folder of funny e-mails sent to our office over the past twenty years.  Some are from people whose second or fifth language is English, and some are from folks whose first language is supposed to be English. Some speak for themselves, and a couple include my wise remarks.  And I couldn’t stay at my job without sharing some humorous exchanges with Noam. They appear below, indented, word for word, typos and all.  My comments and notes are in bold.

**
Dear Noam Chomsky,
Thank you for reply.  I think you are public property. We are getting inspiration and manure from your thoughts. In this regard we should cover all aspects of you. But if you want to prefer intellectual issues than it is ok.

**
Dear Professor Chomsky,
Thank you for your prompt reply. We are of course very sorry that you cannot come but be sure that we understand. Being scheduled 'To the hilt and beyond' sounds bad though I do not know what 'hilt' means.

**
Dear Bev and Noam,
The principal subject of my research is the process of domination of the mainly normalization and quality assurance organizations, around the world.  In second place, understand the communication process of this kind of organizations with the UN and other relevants institutions, especially the power fluids into the structural chart and the members of its respective boards.

Noam asked me to write a response, which really meant that this was one we could make a pass on. Although his challenge was made in jest, I wrote, and of course only sent it to Noam:

Please cut each word in half, take two aspirin, and write us again next year.  Professor Chomsky will have returned from Mars by then, although he does have a tentative trip to Jupiter planned immediately following, depending upon the domination of the mainly normalization and quality assurance organizations around the world and in space.

Noam wrote me back:
“If I copy and paste it, will you sue me for plagiarism?”

**
Yo Gnome,
Yoor smardt I likke yoo. Yuo be jeenyus.

**
Hello Noam,
Sorry to be impolite with the last e-mail asking if you were alive or not…Sorry. You see, I am doing a Cognitive Schedule degree and was doing research for a presentation on you and could not find any dates of death because being stupid I thought all famous psychologist were dead.
Again, so very sorry if I offened you by asking you were alive or not.

Let me just say something here.   The researcher above wrote that note in 2004. Maybe he was confused by the announcement, below, made by Noam’s colleague and our friend, Laura Ann Petitto, a few years prior.

Dear Colleagues,
Nim Chimpsky died on Friday, March 10, 2000, at the age of 26, from a heart attack at the Black Beauty Reserve in Tyler, Texas. Many of you will recall that he was the subject of the Columbia University Language experiment in the mid-1970’s.  …[I]t is the passing of a life, albeit a chimpanzee’s life, and one that - whether or not he  ever intended it - contributed greatly to our knowledge of how human children learn.  Good bye Nimbo.

**
Dear Professor,
I feel that it behooves to me to apologize, for I was being inconvenient.

**
I had to take a picture of this next one. Someone wrote using a Yahoo e-mail address requesting we sign a copy of a book. At the bottom of his letter was the standard Yahoo closing:  Do you Yahoo!?

Noam drew a crooked circle around the phrase, with a note to me: 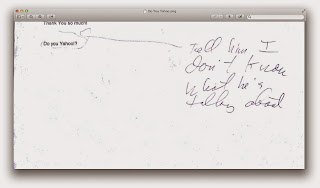 (Noam's note says: Tell him I don’t know what he’s talking about.)

**
Last winter Noam had one of his famous bad colds and lost his voice, and I gathered the used mugs and the bowl that held his throat lozenges from his white table, to clean them.  Before I could return them, I walked into his office to meet with him and noticed something funny near his mail pile.

He had taken the last packet from a box of tea bags, and poured the loose throat lozenges into the rectangular cardboard box, tearing off the top flap. It now sat neatly on the edge of his desk.

“Oh, do you like it?” he asked. “I was pretty proud of myself when I found a container for the lozenges.  It was almost like cooking!”