It had been an exhausting few days, but there was nothing more we could do for Roxy at the moment, so I forced myself to get back into my car, leaving Laura at home to rest.

Our friend Gail Rundlett, who performed at our wedding the previous August, was hosting a concert in honor of activist-singer-songwriter Pete Seeger, along with folks from Arlington’s United for Justice with Peace (UJP). Almost half a dozen years earlier, Thea Paneth and other UJP members generously took turns delivering cooked meals to the Chomsky home when Carol was ill.  Noam was beyond grateful, but those visits ended when Carol’s eating became more sporadic, and the family gathered and prepared to quiet the house for Carol’s leaving.

Just a couple of months before her death, when Carol was more engaged and alert, Pete Seeger’s assistant contacted our office.

“Pete is a big fan of Noam’s, and he would be honored to have a conversation with him,” she said. It always tickles me when well-known people put a meeting with Noam on their wish list – Peter Coyote, Wallace Shawn, and Danny Glover; members of The Dead Kennedys, Bad Religion, and Rage Against the Machine; and leaders such as Haiti’s Laurent Lamothe, Venezuela’s Hugo Chavez, and Fidel Castro. I get a kick out of the fact that some people plan for many months, and even years to meet with Noam for even fifteen minutes, and yet my dog, Roxy, has been able to wander in and out of his office since I started bringing her to work in 2004. To add to the irony, Roxy isn’t the least bit impressed by Noam’s accomplishments – she is interested only in finding scraps of food he might have thrown away or dropped unknowingly near his desk.

I arranged for Pete to call our office before ringing Noam’s house, so I could first check that Carol was having a good enough day to talk, and of course my secret agenda in setting it up this way was to be able to say hello to Pete myself.  (Mea culpa.) Once I gave the green light, Pete would call Noam’s home to chat for a few minutes, and then he would sing a couple of songs to Carol.

When Pete called on the arranged day, I told him I had a great appreciation for his music and politics, and I asked him what it was like to be blacklisted from singing for more than a decade.  He said he could at least sing on some smaller stages, and for friends. We talked for a couple of minutes, then, quite unexpectedly, he sang “Circles” to me, a song he said he was planning to sing to Carol. Pete Seeger was on the other end of the phone, singing to me, just to me.  It took me a while later in the day to figure out what wet droplets smudged my to-do list.

We can’t turn back time, but what I would give to revisit that moment: Pete Seeger singing to me, and a younger, healthier Roxy snoozing comfortably on her cozy red and sheepskin bed under my desk.

I welcomed the idea of finding temporary peace in Pete Seeger’s songs at the concert, with our sweet and beloved old pup in the kind hands of professionals, where a high fever, and a nefarious case of pancreatitis affecting her gall bladder and liver required hospitalization.  She hadn’t eaten much in almost a week, and we were staring down the possibility of ending her life.  Since she was otherwise quite healthy, and there was a 50% chance she would make it through in a pain-free sleep, we agreed to treatment, though surgery of any kind was out of the question. If her body didn’t make a decision for us, we would seriously revisit her situation after two days.

Once inside the church, the music lulled me into the strange in-between state where one can experience a momentary moving away from heart-felt pain – a mother’s dying, the loss of a friend, the illness of a pet.  I enjoyed this much-needed emotional respite.

During the break I had a chance to tell Thea how much Noam (and I) had appreciated the kindness of the UJP folks during Carol's illness, and I also thanked her for her unwavering efforts.  “I will never back down from my stand for peace. Not one inch,” she told me. I admired, and even envied, her tenacity.

Gail’s was the last set, and her rendition of “Pack up your Sorrows” wrapped around my throat and threatened to take my breath from me. Somehow, though, it also allowed me to begin to accept the fact that Roxy might die. I sat there feeling all of Elizabeth Kubler Ross's stages of grief at once. Couldn't I have Roxy for one more year? Could I accept her end as I thought about her cocker spaniel eyes watching us leave, her body panting in discomfort in her hospital cage? What was keeping me from jumping out of my seat and driving to the hospital to take her home?  I was beginning to find acceptance, but I was also angry.  This was supposed to have been a special week spent hiking and playing and enjoying time off for our May birthdays – Laura’s, mine, and Roxy’s.

I settled again and told myself that what was best for her right now was our staying away, to give her a chance to rest and heal. I know animals are different than humans – they live in the moment – food, squirrel, stick, ball - and probably don’t consider death at all. They certainly don’t worry about it. Roxy would never choose to be hospitalized and on intravenous drips. Laura and I chose that for her.

If I could have taken on her pain, I would have. This is more or less how Laura and I live our lives, maybe to a fault, and certainly how people like Pete Seeger, Noam Chomsky, Thea Paneth and the UJP group, and so many other revolutionaries choose to live theirs. 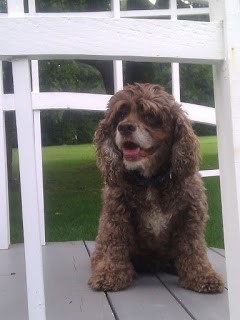 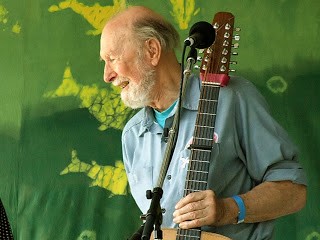 I’m happy to say that after barely three days in the hospital, Roxy decided to wake up, stand up, and put up a fight with the technician as she tried to take her blood pressure.  We packed her up and took her home, where we nursed her back to her old, cheerful, energetic self. The day after we took her home from the hospital, she turned thirteen. We had Roxy with us for ___ more years...