My son Jay tried to keep Laura and me high on the “knowledge of cool music” scale. Since the night the floor manager sneaked my friend and me into the last half of a Beastie Boys concert when Jay was fourteen, music has been one of the ways we’ve bonded. Jay updated us often on the best and newest musicians, fearing I would otherwise be stuck forever in the 60’s, with Joan Baez, Joni Mitchell, Dylan, James Taylor, and Carole King.  There are worse things, if you ask me.

So when he handed us an envelope one Christmas morning, we had an idea that it might contain two tickets to see a band. For the two previous Christmases, he had given us tickets to attend a standing room only performance of - I have to admit – a fabulous young band called Lake Street Dive. Laura and I call them LSD for short.  We opened the envelope, and voila.  LSD. Again.  “Listen, go in and stand right in front of the sound guy.  The sound is best in that spot, and you can lean against the railing.  Plant yourself there, and don’t move,” he said with his usual in-the-know enthusiasm.  The following March we headed for the show, navigating Boston traffic and parking where he instructed us, and walking to the House of Blues where we queued up in a long line with twenty-, thirty-, and a few forty-somethings. When we reached the venue, I was asked by a middle-aged security guard to open my purse.  I unzipped the center pocket, exposing a small metal pill case.

“I assume you have some hard core pills in there,” he joked.

“Yes, they’re for my blood pressure. Would you like to buy a couple?” I asked. He chuckled (or was it a gasp?) and waved me through. Had he asked me for an ID, I would have opened my shirt collar to expose my neck. The things I find I can get away with – or just think about getting away with - beyond my 60th birthday.

I'll back up here and take a slight, but related tangent.

I don’t remember the exact moment when I realized that being Noam Chomsky’s gatekeeper could at times feel magical. Recognition of my “people will offer me free things” superpower was concurrent with my sudden awareness of the political savvy of a good number of well-known punk and hard rock musicians who were contacting our office.  Well-known to me through Jay. Just a couple years into my job, I remember being impressed by a letter from Noam to Jello Biafra when it landed on my desk, thanking him for a packet of tapes he had sent to our office.

Noam wrote: Many thanks for the tapes...though to be honest, I have to say that finding a moment to listen to tapes is a luxury I rarely have.

In other words, there's not always room for Jello. I noted to Noam as an aside that Jello Biafra was founding member of a political punk band called “The Dead Kennedys.”  He looked at me blankly.  Never mind.

Once I recognized my superpower, I learned to keep my ears and mind open.  Jay moved to Colorado after college, in May of 1996, and soon after, I intercepted an email from Greg Graffin, co-founder, lead singer and songwriter for the band Bad Religion. In a subsequent phone conversation, I learned it was Greg’s dream to meet Noam, and after a few minutes of investigative correspondence (meaning I stayed on the phone with Greg as long as possible to impress Jay with details), I mentioned the fact that my son was a big fan and lived in the Denver area. Greg said he would be sure to send him two tickets to the band’s upcoming concert at the Paramount Theater, and back stage passes. I pinched myself. I also learned from Greg that Bad Religion had recorded a political commentary of Noam's as a single in 1991.

Later in the day I asked Noam if he remembered the band, and he said, “I do, and I think we have copies of that record around here somewhere.”  This was one of the first times I was surprised at what Noam took in.  I would never have guessed that the records would have even cross his radar.

I got him settled into his next interview and went off to the nearby locked space that we referred to as “Noam’s library” -- a huge, treasure-trove of a room in the old Building 20, filled with a collection of Noam’s favorite books -- many of them now valuable collectors items -- his bibliography, periodicals, reprints, and drafts of political and linguistics book chapters, which spilled from shelves or peeked out from cardboard boxes on the floor.  Walls of file cabinets were filled with correspondence, Noam’s articles and interviews, and other people’s articles. I went through a few boxes on the floor, returning briefly once or twice that week, but finding nothing. At the beginning of the second week I reached into one dusty box and all but danced a jig when I found a half dozen copies of the 7” vinyl record titled, “New World Order: War #1.” Find it here  When Noam signed two of them for me his next day in, he asked, “What are these?” His focus had obviously shifted since our conversation about the single, and I recognized the glazed-over look that followed anything longer than a brief explanation, so I kept it short, and moved on.

Guitarist Tom Morello, former Rage Against the Machine band member, came into focus for me in 1996 as well, when he emailed me to ask if Noam would agree to an interview to be aired as a National Radio Broadcast.  This would be the first time Tom interviewed anyone on National radio, and he was anxious, excited, and doubtful, but I nudged Noam to say yes. Tom was thrilled, and I was once again a proud Mama - not only because this impressed Jay, but also because Tom called me 'Mom' for a while later. Tom was later prominent on Pete Seeger’s 90th birthday celebration cd, sent to me by one of Seeger's assistants as thanks for arranging a phone conversation between Pete and Noam.  I loved Seeger, but Jay had no interest in his music, putting him in the same category as Baez and Mitchell.

A few years later, in 2000, I wrote to another Rage Against the Machine member, Zack de la Rocha, the band's former front man and songwriter, “Professor Chomsky has agreed to an interview with you… and I hope you don’t mind, but I would like to ask you a favor. My son has been following Rage for a long time, and he would love to meet you when you’re here.” Knowing myself, it’s possible that I jokingly suggested he could interview Noam only if he agreed to talk with Jay.
It thrilled me when Zack agreed. One more notch on my “Cool mother” belt, on the shoulders of Noam Chomsky. Mea Culpa, but ask any mother how far she would go to add a notch to that belt, and you will find forgiveness.

Graphic designer Brad K. approached me in 2003 to ask me to convince Noam to have his likeness printed on the underside of a promotional skateboard deck for the band Pearl Jam called “American Heroes.” I told Noam that his oldest grandson would be impressed, adding that Jay thought Pearl Jam was an intelligent political band. Noam had recently written an article for Pearl Jam’s “The Manual For Free Living” newsletter, though he probably had no idea at the time who or what Pearl Jam was. Months after I told Brad that Noam agreed, he sent me a publicity package including the finished decks for Jay, me, and Noam’s grandson.  I was a repeat offender.

For more than twenty years Jay and I had the conversation about how to get Noam to proactively reach out to younger people.  I realize now that he always has “gotten” how important that was, especially as I stand back and count the number of bands he connected with, even before my enthusiasm helped sway his decisions in the mid 90’s, and for years after that, or so I like to think.

Back to the present.

For almost four hours, from the time the doors opened until LSD was winding down, Laura and I stood in front of the sound guy as my son advised, leaving our post only once each to use the bathroom. It was a truly great show, but the railing was too flimsy to lean against, and we felt the burn walking back to the car after standing for so long in one spot. The next year I dropped some hints about surprising us with tickets to an old-fart performance, like Joan Baez or James Taylor. Actually, I really didn’t care who they were, as long as the venue had seats.  Unless I developed another superpower – the ability to turn the clock back a few decades. 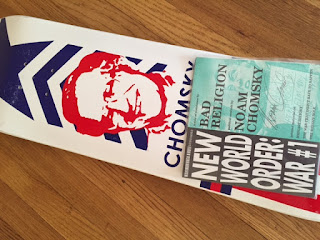