Why it's hard to leave

It's been the best of times, and it's been the worst of times. I have abandoned my readers for close to nine months.  Many of you have asked me to get back to my writing, and I appreciate that.

When I began working for Professor Chomsky almost 24 years ago, I was 39 years old, and he was close to 65. Retirement seemed to be on his radar then, but I quickly realized that even if he stopped officially teaching his MIT class, he would always teach and lecture. He retired from MIT (meaning he wouldn't be teaching an ongoing class) about ten years ago, but as I predicted, to this day he continues to work as tirelessly as ever.

So it's ironic that I, at 63 years old - only two years younger than the white haired guy was when I started assisting him in 1993 - will walk out of the office for good later this summer. I am retiring.  Or in the words of Morris Halle when I told him this a few weeks ago, "You're quitting?" And Noam - and Morris - will still be there.

It's hard to leave, especially as I look back at the past week, which has been a microcosm of my life in our suite over all of these years.  Sylvain Bromberger, one of our 90-plus-yr-old professors, brought me a block of real Parisian butter he carried back from France in his suitcase.  I had a good talk with an ex-student, now a visiting professor. I grabbed a quick lunch with Andrea Moro, the amazing linguist and neuroscientist from Pavia who welcomed Laura and me to Italy to help with logistics during Noam's speaking tour there. In the afternoon, a trip to Google with another ex-student, my friend Ann Farmer, as the delightful, enthusiastic Hasan lead Noam in a Q&A, addressing the current political climate, Noam's early activism, and corporate responsibility.  It was a comfort to hear Morris, who interviewed me for this position and is now approaching his mid 90's, cackling in the background at a few of Noam's comments. And most recently, I had an unexpected interview with Christopher Lydon at the end of the day, on how I've viewed my boss and his work over the past two dozen years.

I've learned from a lot of you out there - activists of all types - that learning about Noam Chomsky as not a super-hero, but as a person, helps energize you to do your own work. Having said that, I recall many instances when Noam seemed to me to be an actual super hero.

I hope to develop a book based on my blog posts about my experiences and insights working as Chomsky's gate keeper.  Thanks to all of you who have given me useful feedback and encouragement, even expressing the joy and personal nourishment you've experienced as my readers.

Listen to this podcast, for the Open Source radio show, to hear Chris Lydon and Noam Chomsky in conversation as Lydon questions him on his views of current world affairs.  You will hear Lydon interview me about 3/4 of the way through about how I see Noam Chomsky as a person.

And I just found this - more of my personal interview with Lydon on what Lydon calls "The Soul of Noam Chomsky." I probably would not have approved that title, had they asked me...

More of my interview about Noam 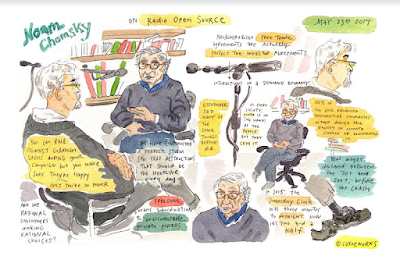