As I spend my first day alone, without her...

I wrote this one week ago, exactly.  It took me a week to be able to look at it again, and since Roxy was so much a part of my life at MIT, with Noam, Morris, and Glenn, I thought it appropriate to post it here. Good bye, my friend.
**

Laura takes Roxy out early every morning for a walk, and when they return, before her breakfast, Roxy runs to the bedroom to make sure I’m still there, to tell me what a good girl she is to have done all of her usual morning stuff outside. ‘Where have you been?’ she wants to know, though it’s only been a half hour since she left my side.

But this morning, for the first time since we adopted her as a puppy, the quiet cuts and confuses me. For brief seconds throughout the day, I search for her – she will want to finish the egg bits on my plate.  She will want to sit on the couch next to me, and I will lift her there - she hasn't been able to jump up on her own for almost two years - and we will both settle. I will write, and she will lay there dozing, one eye open, to be sure I’ll take her with me if I grab my keys for a ride in the car. Her soft and familiar breathing, my typing, the cat sleeping on the red chair, will remind us both that all is well in our world.

But this morning, as I face my first day without her, without my best friend Roxy, my world feels empty.

Love is love, a friend writes to me.  No matter if they have two legs or four.  Most of my friends and family understand our heartbreak, but even they will expect me to move on before I’m ready. I’m careful when I talk to a few who aren’t animal lovers. How can they understand the depth of our grief? I think it’s the lost routine that cuts me so deeply, as it does Laura, making our loss more unbearable.  I miss her paw on my arm, her head resting on my shoulder, her smile at the beach as she was lost in the seaweed clumps she so resembled, or pouncing on snowballs in the snow. Her afternoon walk, the offer of the last good crust of my toast.

We had brought her back to a semblance of life over ten days with subcutaneous fluids, a small pill for nausea, and steak tips and chicken. We gave her, a notorious cat food thief, tiny cans of cat food when she turned her nose up at the fresh meat. For two long weeks, she vacillated between greeting us with a romp, and falling over when she stood.  Our good friend Mary, a mid-wife, came with roast beef, which Roxy gobbled up after not eating for a while, and then performed Reiki on her. How lucky were we? But finally, we were out of options, and Roxy was out of enthusiasm. We lifted her up from her upscale memory foam bed on the floor to our bed those last few early mornings, and we stroked and petted her and told her we loved her, and recalled our favorite adventures with her.  We whispered that it was ok to go. We were cowards, not wanting to make that call, but she didn’t seem to be in pain.  When Roxy was in pain, she panted.  These days she was serene, happy to be with us, but slowly, slowly, leaving. Sleeping more. Forgetting sometimes how to drink, refusing her favorite foods. We waited for the certainty of helping her go, for the moment when we wouldn’t have a trace of doubt.

After she lived for a year with someone else, we took home this matted up year-old puppy at the end of a rope, no collar or leash, a plaintive look in her eyes that would have you buying a dinette set from her, were she human, even if you didn’t need one. We had her groomed and de-ticked, and our beautiful and relieved little chocolate Cocker Spaniel with a newly-exposed sweet white spot on her soft belly spent fourteen and a half years with us.  For more than thirteen of those years she joined me at work at MIT.  She had treats from a glass jar, a water bowl near the water cooler, and a bed under my large desk. Roxy met photographers, professors, researchers, activists, journalists, circus clowns, writers, and artists.  She received numerous gifts from visitors. My boss, linguist Noam Chomsky, dubbed her ‘the cat.’ She brought comfort to countless students who missed their dogs back home.  More than a few times during the winter months, she startled someone when she popped out of the elevator or walked around a corner, in need of a grooming and looking more like a small brown bear than a dog.  She greeted people on the elevators, in the halls of MIT, outside Stata, the Student Center, and Kresge.  “Can I pet your dog?” Yes, please. “Is she a student here?,” some would joke, and I would say, “Of course not. She’s a professor.”

I insisted Roxy’s hair had grown curlier over her years at MIT.  I figured she must have licked someone’s overflowing science experiment off the floor, perhaps a bit of sheep cloning DNA.  She was not a floor snob – she would lick anything. But at home, if the dog treat in her mouth did not match the smell of chicken in the oven, she might spit it out.  She couldn’t be fooled.

What a life she had – for eight years we owned a cottage in Searsport, Maine, where she kayaked, swam (but only when necessary to stay near us), and waded with us through tidal pools in the Penobscot Bay looking for pieces of sea glass and pottery.  On the beach was a rock, about four feet by 18" which looked like our Roxy, laying on her side covered in a blanket with her face and front paws sticking out. We called it the The Roxy Rock, and we visited it each time we walked down to the beach. She loved going to our cottage, where our attention was on her, on relaxing and visiting with new friends.  She even marched with us in a parade with the SAFE animal foundation we supported.

On a rainy Sunday we paid a stranger to come to our home to fill our Roxy’s failing body with a sort of Valium mixture, then an anesthetic, and then the needle to her vein that would take her life.  Would I ever stop wondering whether the time was right? Laura tells me once again that it was her time. She had untreatable anemia.  She had liver and kidney problems. She was failing.

After the deed was done, we wrapped her in a small red blanket and carried her to the back of the Vet’s car. I kissed her gray muzzle and her two furry paws. When I stood back, I saw through my blurry eyes exactly what I had always envisioned when I looked at The Roxy Rock back in Maine. I had never wanted to admit it or even think about it, but I saw that rock as what I would have chosen as her grave marker. Some day we will visit The Roxy Rock again, but not yet.

We walked slowly up the stairs to our house and collected all that we could so there would be no shocking reminders, no blankets, no bed, no small toy behind the sofa or under my car seat, no leash on the hook, but it didn’t matter.  I stepped around her bed, on the floor next to ours, early the next morning, despite its absence. I was thankfully exhausted enough to fall back to sleep, but my dreams were cruel reminders of this loss, and a lifetime of others.  In the morning I tore off a crust of my toast and then, almost simultaneously, remembered.

I've been through this before, and I know I will eventually read the haiku Laura wrote this morning, or the poems my yoga friends sent, or sing, without crying, the songs whose words we rearranged just for her, but not yet.  Today I will think about her and write about her and cry, and walk outside without a leash in my hand, eat dinner without handing her a green bean or calling her over to lick my plate. I could never be trained not to feed her from the table.  My heart is too big, to a fault. As was Roxy’s.  Who else would look forward to going to work almost every day for more than thirteen years, without a paycheck, without complaint, making people, especially me, happy just by being herself.  Maybe she looked forward to the car dancing on the way in, the long walks on campus, or the stop at the forbidden cemetery at dusk (careful to stay on the walkways) on the way home, where she chased tennis balls in good weather, and snow balls in winter.  Whatever it was, we were together.

I’m told she will always be a part of me. I hope so. Hundreds of letters, texts, cards, and Facebook notes have helped us to remember with gratefulness and joy the scope of her life, and the love she gave and received during her time with us. I’m going to try and heal a bit before we go looking for a new pal or two. I’ll be taking home the first one who spits out the treat I offer.

Below are photos of Roxy at a beach in Rhode Island just a week after we had her groomed for the first time, and another taken in Wellfleet last summer. Both photos are a part of a Tribute to Roxy that our dear 10-year old Annika put together for us. 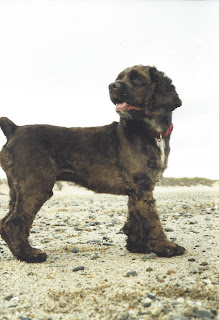 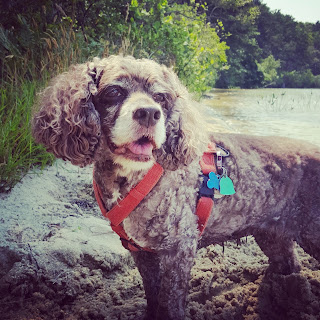