Recalling memories of and quotes by Morris on the day of his passing, April 2, 2018

“The only thing I jump to are conclusions.”

“Beverly, WHY do you live all the way in Framingham? Kick out your tenant and move back into your house in Watertown.  I once dated a girl who lived so far away that it took a bus and two subways to get home.  This is why I only dated her once.” I moved back to Watertown.

Before he left for a trip to Paris with his wife Ros, he said, “I don’t particularly like to travel, but I do it because Ros likes to, and she’s my wife.”  Then laughing, “I mean, what choice do I have? She wants to travel, so I travel!”

The only time I heard him yell was when he found that Roxy had sneaked into his office and pulled his tuna sandwich out of his red backpack, which he had propped against the back of his fifty-year-old recliner chair.

“I’ve had this rash on my face for weeks – my doctor couldn’t figure out what it was, and told me to ignore it.” I happened to have in my desk a tube of what I considered a magic potion –Vaseline Creamy lotion.  I handed it to Morris and told him it cured everything.  He looked skeptical, but three days later, he came to me, hands in pockets, and said “I don’t know how it happened, but the rash is now gone! How did you do it?”

After leaving the office one day: “I came back to call Ros – my car is frozen and I can’t get the key into the lock.“ By coincidence, although my car lock had never frozen, the weekend before I happened to buy a tiny spray canister of lock deicer, which I had in my bag. I put on my coat and Morris and I walked to his car. He sprayed it into the keyhole, the ice melted away, and he thanked me and drove off.

A few years later he witnessed a serious car accident on his way to work. He came into the office and announced, “I’m not driving any more,” and the next time he came in, he rode the T.  “I hung up my keys,” he said.  “That’s enough.” Just like that.

He was practical, to the end. He and Noam shared that way of looking at life – ‘Here is a difficult problem, here are the ways it can be solved, I choose this one and will go forward with it and get on with things.’ I know little about how they approached issues of linguistics, but I have to guess that practicality had to figure into the way they worked.

Chatting with Noam near my desk, Morris turned to me and said, “Every conversation we old guys have now is an organ recital.”

When I asked him how it felt to turn 90, he said, “I’m old. But I thought about death once, and it depressed me so much that I never thought about it again.”

“Look, I’m forgetting things,” he told me sometime around his 91st birthday. “I missed another doc appointment. I need you to start keeping a calendar for me. Can you help me with this?” And of course I did. For this, there was no magical cure, just support.

Morris came into the office less and less. When he did come in, I sent an email to his friends and colleagues in the department to encourage them to come and visit if they had open time.  If he was alone for a stretch of time, I would sit with him and ask him to share some of his MIT memories.

Morris taught me a lot of things, and he learned to accept and even appreciate my brand of management – one that did not incorporate ‘steely impersonality.’ He shared countless stories with me, and I accepted these gifts each time. When I told him I was retiring in August of 2017, he told me he and Noam would most likely close up shop when I “quit.”

On April 2 of 2018, after being absent from our office for the good part of a year, Morris hung up his keys and said, “that’s enough,” and with great practicality and little fanfare, he left us all behind to ponder his life, and the considerable influence he had on ours. 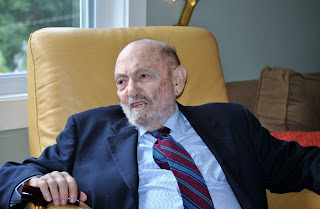