I'm still writing this book!  I had fun this week looking at a video from the Spring of 2017, when my two step-grandchildren visited our office and met Noam for the first time.  Below is a scene from that day.


As Noam began a conversation with the kids, explaining to them that he didn’t watch TV at their age, but listened to stories of the Lone Ranger on the radio, I reached quickly for my phone and switched it to videotape just in time to record him saying, “I listened to the Lone Ranger. He was a cowboy. He said, Hi-Ho Silver!” Pause. “He had a Silver horse.”
“Was his horse silver? I thought the Lone Ranger called him Silver because his bullets were silver,” I said. I had no idea where I was going with that, and had a chance to take it back when Noam asked me to repeat myself, since he hadn't heard me clearly. I had seen the TV show decades after he listened to the radio version, so I knew the horse was white, not silver.
I no longer assumed Noam was always right about everything, though I was sure in this case he had simply misspoken, so I repeated myself. The kids were quiet, listening, and I wondered whether our conversation was of any interest to them. I was more than interested - I was excited to hear Noam share childhood memories again, because it had been a while.
Noam turned in my direction, smiling. “Sure...a white horse. It was a white horse. Silver, it was called. ‘He called out, 'Hi-Ho Silver!' You don’t remember that?” he asked me, turning back to the kids.
“Ok, so it was a white horse, I do remember that, Noam. And did you hear that, guys – there was no TV back then,” I added from behind my phone, reluctantly moving on from what felt like our version of a Who’s on First routine, a favorite skit of Noam's and mine, which our shorthand conversations sometimes resembled.
“No TV!” Noam repeated, and the fun of playing with him again after a long dry spell left me aching with my own brand of nostalgia.
“Annika, do you have a question for Professor Chomsky?” I asked, bringing us back to the purpose of our gathering.
Instead of making eye contact with him, she was looking to her right, at me, her nervous expression saying, “I forget. Do I have a question for the smartest man on the planet?” and I hoped we hadn’t lost her with our "The horse is [named] silver" discussion.
I reminded her that she wanted to ask Professor Chomsky about the Boston Women’s March.
“You went to the Women’s March?” Noam asked.
“Ya,” she said, now looking toward her brother, her hands on her hips.
“Was it exciting?” he asked her.
Declan shot Noam a look as he moved over to give his sister the stage.
“Yes, but it hurt my legs,” Annika said, referring to our 90 minutes of standing and waiting, followed by two or three hours of walking, since we also walked from Boston back to MIT.


I reminded her again that she had wondered how, and whether, marches made a difference. She pivoted her head almost mechanically, as if willing herself to do so, and nodded in his direction, finally, as he began to answer. 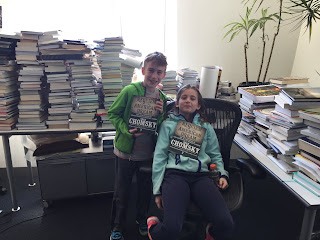